Just added to your cart

August 10, 2022
"We'll probably never get tired of seeing cars going up against motorcycles at the drag strip. While bikes have a clear advantage thanks to their ridiculous power-to-weight ratio, they aren't necessarily going to win every challenge they sign up to. Launching from a standstill can be tricky, and a wheelie at that point might completely ruin your chances of winning. But a rolling race is a different ball game.

The Toyota Supra that showed up for today's Hoonigan drag race may seem familiar to you. And that's because it made a previous appearance on the show, back when it raced Travis Pastrana's Subaru. That was a pretty intense match-up, but ultimately the 862-hp Gymkhana-spec WRX STI took the win.

So we know that this Toyota is quite fast, but let's have another look at the specifications before making any predictions. Thanks to a massive 76 mm turbo, the 2JZ engine should churn out about 1,000 hp. That's not bad for a 3,500 lbs (1,587 kg) car! But with RWD only and a T56 6-speed gearbox, it might struggle, launching from a dig.

Meanwhile, the white crotch rocket is a "home-built" Aprilia RSV4 RF. This bike features parts from different generations: it's registered as a 2013 model, but it has a 2016 swingarm and 2017 bodywork and electronics. Even though it might not look that scary to the untrained eye, we are talking about a 420 lbs (190 lbs) bike with 185 rwhp.

Sure, you also need to consider the weight of the rider, but that also applies to the car. And it has a quick-shifter too, which means it will be going through gears in a blink of an eye. Now, the Hoonigan pad isn't all that long, and they usually run the race up to 1,000 ft (304.8 meters).

While you would expect the motorcycle to have a bad time going off the line, it's bound to get back into the race once it shifts into second gear. And a longer piece of tarmac would be favorable for the car, all things considered.

Looking at the pre-race predictions, it seems like everyone is confident that the Supra will win. As it goes off to a premature start on the first run, it just barely manages to cross the line in first. But you'll need to freeze-frame for a second to acknowledge that fact.

The rolling race adds even more drama to the challenge as the Aprilia sprints into the lead from the get-go. And once it's there, there's no turning back. On the first attempt, the bike is the one to set the pace, and by the time both of them cross the finish line, there's a six-car gap in between.

On the last run of the day, the car gets to set the pace but that was not enough. The gap is reduced to just two cars, and it's a good thing they didn't race for pink slips! The Supra might have stood a chance if it had more power and a sequential gearbox. But given the current setup, it doesn't stand a chance against the RSV4 RF. That's just how fast liter-bikes are these days!" 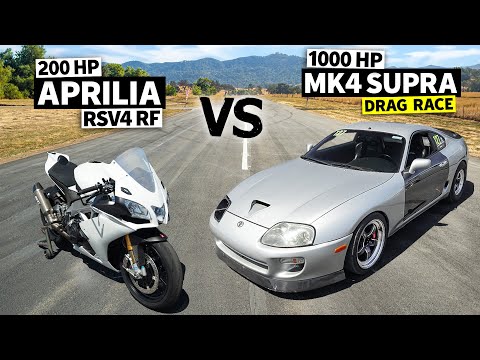